Xenophobia and THE MEMON – “Wherever there is a human being, there is an opportunity for kindness.”

WMO has always answered the call of the unfortunate victims of a human tragedy or a natural calamity in any part of the World. The organisation is always on the forefront and has contributed in every way possible to alleviate the pain and misery of those who seek refuge under these tragic circumstances.

If there were any doubts that the World Memon Organisation worked for a particular community, race, religion or reigon of the World then the recent Xenophobic attacks in South Africa have dispelled all of them.

While the violence in some parts of the country made many to lock themselves in the comfort of their homes, a man named Solly Suleman drove fearlessly with medical and relief packages for the thousands, injured and displaced without food and clothing.

A prominent member of WMO(Africa) and IMASA( Islamic Medical Association South Africa), Mr. Solly Suleman embarked on a medical mission on Sunday 19th April 2015 with volunteer doctors , IMASA staff and nurses to provide medical care to foreign nationals in two shelters in Phoenix and a shelter in Chatsworth Durban.

The medical team provided medical assistance to 70 patients who were Somalians and Ethiopians from the business community. The next stop was the shelter at the Rydalvale grounds in Phoenix where over 2000 foreign nationals had gathered . Over 200 patients were given treatment at this centre by the health care professionals.

Besides partnering with IMA in medical relief,  WMO also associated with Jamatun Nisa [APEX Body] to provide meals and other necessities to 700 foreign nationals in the Isipingo shelter. Food and supplies were also sent to the Beatrice St shelter. Mrs. Shireen Arbee, Mrs. Jameela Joosub and Mr. Baboo Akoo were physically present on ground zero and personally looked into the ongoing operations.

WMO supported the Minara Chamber Disaster Relief coordination committee to ensure that there was control over food and supplies to prevent duplication and wastage.

A massive drive was undertaken by members of WMO(Africa) predominantly Mr. Yusuf Kamdar, Mr. Moosa Carrim, Mrs. Fazila and A.K. Ismail and substantial funds were raised around the world for the victims of the Xenophobic attacks. Nobody questioned their religion, community, country or race. It was all for Humanity. 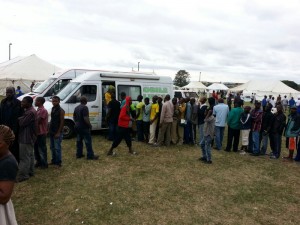 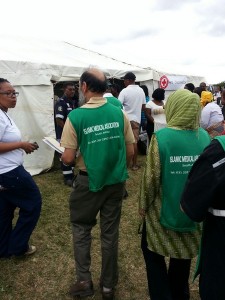 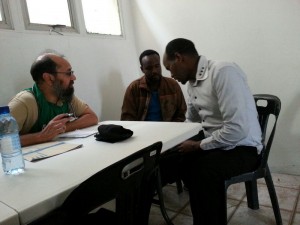 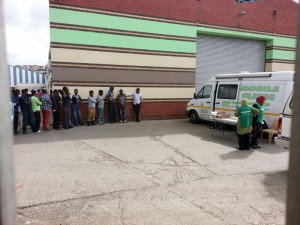