WMO [Africa Chapter has completed the project of installing flood lights in the Laudium cricket stadium. Funding for this project was allocated from the surplus funds from the cricket tournament held in Sri Lanka in 2013.

It was agreed to use the excess funds for the benefit of the Laudium Cricket Association by installing the flood lights enabling the players to enjoy the cricket in the evenings during the summer months.

The project was handled by Mr Mohamed Chaya, who is also the convenor of the Memon Classes that are being held at the World Memon Foundtaion Centre in Laudium. 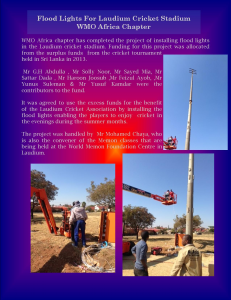